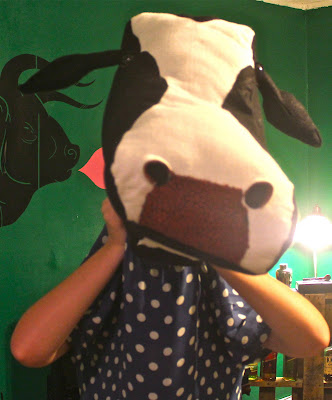 A picture of me, being an idiot.
Posted by megan at 5:07 PM No comments: 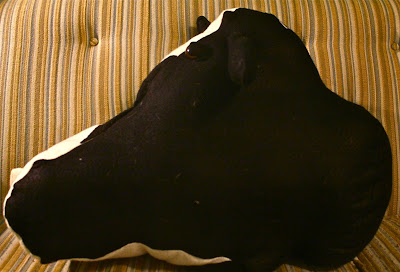 Almost as exciting as a side boob.
Posted by megan at 5:02 PM No comments: 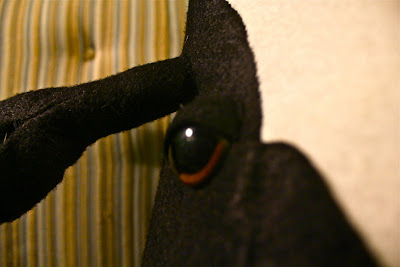 The cow's eyes were fun to make. I had a bunch of beaded eyes left over from my squid project and was glad to get rid of them. Alone, they didn't look like a cow's eyes. So I sewed half circles of black fabric onto the tops of the beads and came out with a lazy, drowsy cow.
Posted by megan at 4:55 PM No comments: 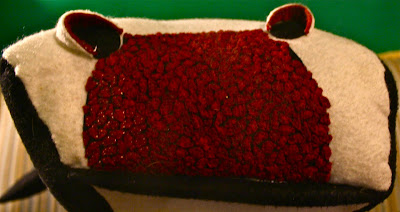 The nose took me 9 hours. I am a psycho. I sewed on all of those little bits myself. When I was halfway through and pressed for time, I thought I should start gluing the bits on instead but then I realized it would look silly half-sewn and half-glued so I stuck it out.

I have always been a stickler for details and I hate half-assing my work, so gluing wouldn't have worked for me anyway.
Posted by megan at 4:49 PM No comments: 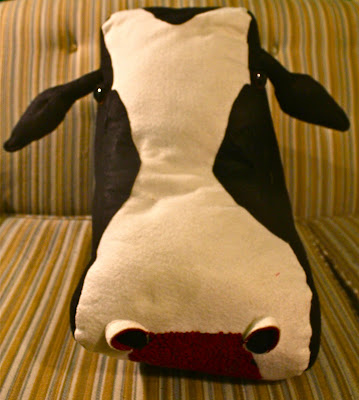 So I made a full-scale cow head for my brother's party. He was having an Urban Legend themed party. Now, I know you're probably thinking 'what urban legend has to do with a damn cow head?' And you're right, no urban legend I knew of. But, once I got the invite I started researching different urban legends. Most of the common ones had been mentioned in his email or had no real plausible way for me to make a stuffed imagining of them.

So I stumbled across this Japanese urban legend involving a cow head. The gist was that there was a school teacher with his class on a field trip. He started to tell them a story about a cow's head. He became entranced, he couldn't stop talking. When he was finished, all of the children were laying on the ground, foaming at the mouth and the school teacher couldn't remember the story he had told.

I know, what an obscure and ridiculous story to choose. Well, I certainly stepped in it at the party when I had to explain that to everyone who asked why the hell I made a cow head. I couldn't just tell them i had secretly been wanting to make a full scale animal head for quite some time. I'm thinking that a horse or a bison will be next...maybe an alligator.
Posted by megan at 4:38 PM No comments: 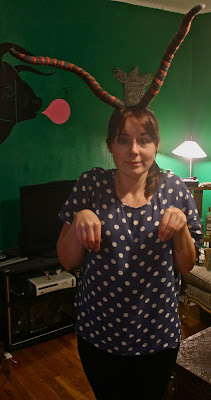 I have to admit, I didn't know what animal the antlers I made belonged to right away. After some research, I found out that they were Impala antlers. I told my brother about my idea and he said I had to add a Chevy Symbol to make myself a Chevy Impala. So I wore all brown clothes, wore black gloves and black shoes for hooves, painted my nose black and made a Chevy sticker. My costume was a hit, though the antlers were a hazard to anyone around me - many an eye was poked in my presence.

Unfortunately, I don't have a picture of me in my full garb and I'm too lazy to get dressed again just for the picture so you'll just have to deal with this stupid picture of me being stupid.
Posted by megan at 4:37 PM No comments: 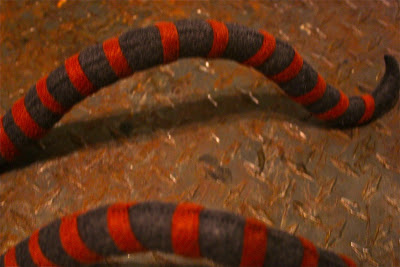 When I finished sewing and stuffing the antlers, there was the issue of getting them head-ready. At first I thought I could just sew a loop to the bottom and string them onto a headband. That idea failed as the loops weren't tight enough on the headband and the antlers kept falling forward. I then decided to sew the antlers directly onto a thicker headband to give them more surface area and voila! It worked!
Posted by megan at 4:31 PM No comments: 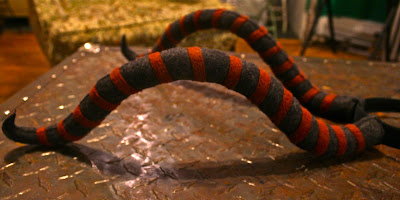 Halloween! Ok, so unfortunately I didn't take a picture of my actual costume, but I was a Chevy Impala. It sprang from me wanting to make a series of stuffed antlers (look for moose next!). So I cut four identical curvy sections out of dark grey (modeled off some sweet cast resin antlers at Crate and Barrel). I sewed one side of two of the curvy pieces together leaving the other sides open. Then I cut out strips of brown and folded them over each other to make them thicker to stand out on the antlers. I positioned them on the gray, making sure they would match up when the second side was sewn up. This was definitely the longest part of the process.
Posted by megan at 4:03 PM No comments: 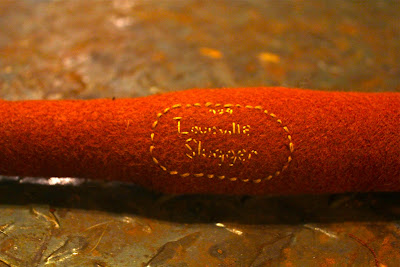 I am, however, getting really good at embroidering. I think when I get a little more practice, I'll make a sweet and goofy embroidered pillow! Suggestions are obviously welcome.
Posted by megan at 3:57 PM No comments: 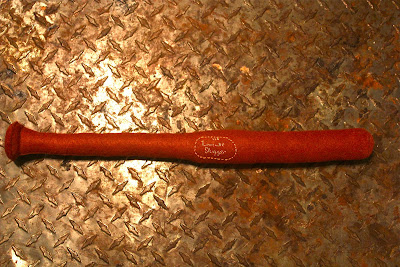 Wow, its been a long time since I've posted anything on here. That doesn't mean I haven't been working on stuff. I finished this addition to the soft weapons series in September but I didn't like it much so I kept putting off taking pictures of it.

I guess I don't really like it because it is so simple and plain and boring. It was boring to make too! Oh well, live and learn. Next time I make a bat, I'll model it after a metal one. Or a cracked one.
Posted by megan at 3:47 PM No comments: