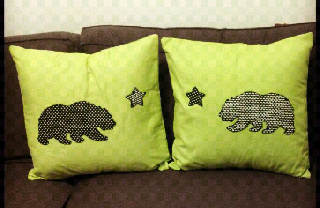 I was happy to have a faster project. I had made a parrot before and birds bodies are pretty simple.  However, there were some parts that took a while: the beak, the wings and the feet.

I am really happy with how it turned out. 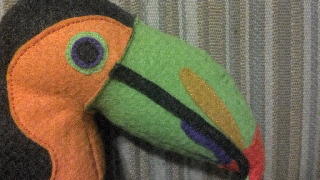 I just wrote a whole post and it got deleted for some dumb reason. Anyway, it said something about my brother getting me a couple of bundles of multi-colored felt for Christmas. One of the bundles had the colors on this here bird. I knew immediately that I would make a toucan...the vibrant colors just called for something tropical. Of course, I was working on those damn moose antlers at the time and couldn't put those down for fear of never picking them up again. Once they were finished, I started the toucan by drawing my templates and deciding which colors would go where. 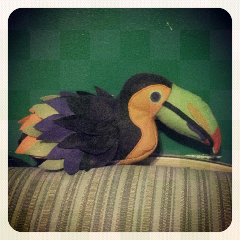 Just so you get an idea of just how much sewing I did. This was the most consolidated area of stitching, but it goes on throughout the rest of the antlers.
Posted by megan at 6:22 AM No comments:

Whew! These babies took me about three months. Now, I now what you may be thinking, they look so simple. I know they do, which is why my next post has a close up. Originally, when I started making these, I was just going to do the cut out shape and call it a day. But they looked so boring with just cream. I decided to add some texture. So I found this nice, dark brown thread I had and held it up to the cream. I loved the way it looked, the colors complemented each other and looked kind of retro together, like a 70's vibe. I began to sew striated lines coming out of the middle of the antler, and coming up the edges of the antler. I made each line different from the one next to it. Some are short, some are long, some are curvy and some are straight. I bunched them real close together towards the middle and spread them out as they got longer. I really love the way the pattern looks. But, when I started doing it, I realized almost immediately I would need to do more of the antler than I had originally thought. And let me tell you, these were a bitch to sew. They took forever! I was going to do the backs and the fronts of the antlers in this pattern until I realized just how long it was taking me. I decided no one should see the backs anyway, so why not just leave them blank? I kept thinking of putting down this project to do a simple one, hoping that would ease my frustration with the length of this one. But I knew if I put them down then I would never pick them back up. When both fron sides were finished, I thought the rest would take no time at all. I was only a little wrong. It turns out the backs were much larger than the fronts and I had to carefully cut them back down to size. After that, I found a nice gold thread and started doing an outside stitch all around the antlers. The three colors really complement each other nicely. I really want to use these babies as couch end pillows but my dumb dog loves to eat all of my sewed stuff! I might give them to a friend or just mount them on my wall somewhere. Anyway, I'm really proud of these. I did take some time to do some drawings while I was working on these but I haven't posted them yet. Maybe tonight!

When I sent the original drawing, I told him I would move the guy out of the fire to the right a little so it wouldn't look like his junk was burning up...something i'm sure no man wants to have to think about everytime he looks at his tattoo for the rest of his life.  My brother also asked that I take out the detail of the hair and clothes on the people.  He said to keep the fire colored but that he might decide to have it black and white when he gets it done.

I redrew the first one the way he asked and he loved it! Personally, I like the detail of the other one better and I really hope he keeps the color in the fire.  I can't wait to see it on him! 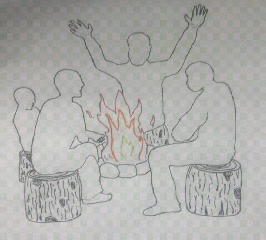 I am on a touch football team with my brothers.  We play every fall and winter.  This year, I started to design our t-shirts.  For the fall, we were Maek Chmura's Hot Tub Horrors.  Mark Chmura is a pro football player who got caught in a hot tub with under age girls and alcohol so I drew a skeleton in a hot tub enjoying a beer with a bra strap dangling from his finger. This winter, we are Najeh Davenport's Laundry Basket Tortes.  Najeh took a dump in his ex girlfriend's laundry basket so I drew a laundry basket dumping out socks.

Anyway, flash forward.  My brother wants to get his second tattoo and he asked me to design it. He gave me a picture of a man telling a story around a campfire and asked for something along those lines where the people were just outlines.  So I came up with this first drawing. 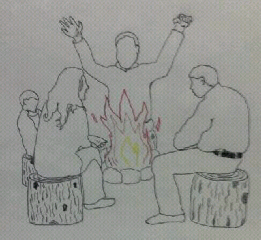